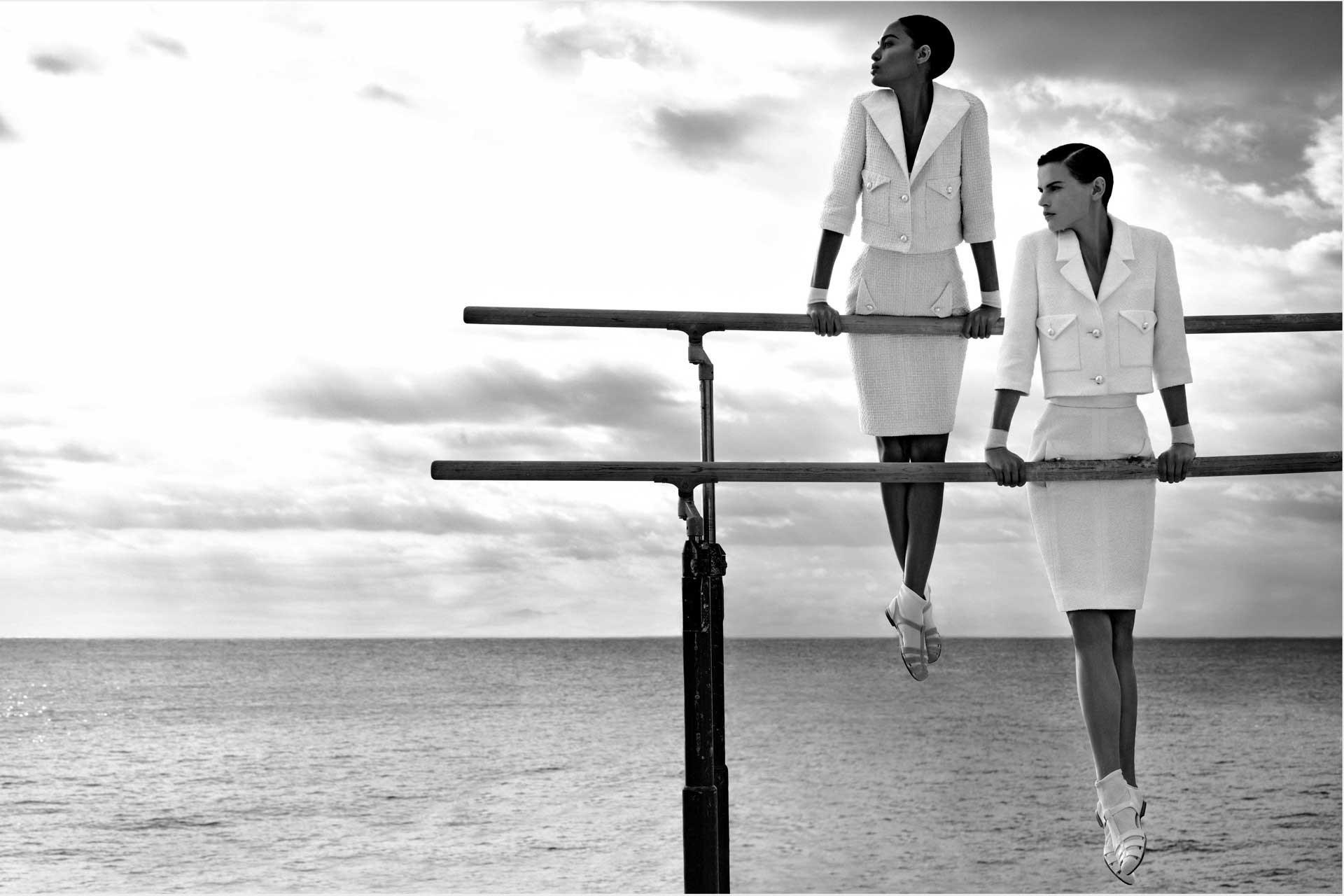 UNDER SHIMMERING CHANDELIERS, fashion figures printed on paper hang floating in the air. This is the Sala Bianca - the White Room - at the heart of the Palazzo Pitti museum in Florence and the epicentre of Florentine fashion and its history. But there is a new contender for attention since the days when Valentino showed his "White" collection under the elaborately sculpted ceiling of this very room, back in 1962. These swaying paper figures are by Karl Lagerfeld, whose photographic work is on display throughout the historic Uffizi Gallery. Perhaps only the polymath fashion designer could take on art history, from Greek mythology to Renaissance painting, and allow his images to face off historic masterpieces. Through the skill of co-curators Eric Pfrunder and Gerhard Steidl, a photographic world unwinds, starting with words spelled out in lights under an ancient window of the Palazzo that overlooks the Boboli Gardens: "I like fashion to be part of daily life, Karl Lagerfeld", they read. Visions of Fashion (until 23 October) begins with varied images - photographs that the designer took to express his work, for Chanel in particular, but also for Fendi and many other projects. Here the presentation shows its true colours: visually exquisite, mentally frustrating. On this tall screen, the photographs are neither dated nor explained. An installation of photography from varied campaigns across the decades Picture credit: @SuzyMenkesVogue

I happened to know that an image from 1992 of supermodel Linda Evangelista's face shadowed with blue is Karl's homage to painter Alexej von Jawlensky. But if there were any explanation of Russian Expressionism and its influence on Karl, I could not find it. As the majestic enfilade of rooms dedicated to historic art is populated by a line-up of Lagerfeld images, the message becomes clearer. Although there is still little description or even definition by date of the photographs, there are some elegant and thought-provoking juxtapositions.

Eike D. Schmidt, the Director of the Uffizi Gallery, explained that some combinations are deliberate stand-offs: for example, models lounging in contemporary room sets in a "Lesson of Elegance" for Chanel (2009) is a deliberate counterpoint to the seated formal figures in the historic paintings on the wall, while the "Atelier Fendi" series (2011) is based on a painter depicting an abstraction of an artist's model. "The idea is to create a stage with these photographs, together with contemporary visitors who take hundreds and thousands of pictures a year," Schmidt says. "To have a picture taken by a master photographer is something different. We have fashion, which relates to what we are wearing and also to historical fashion." The most obvious visual connections are by colour, but Schmidt admits that there are other meeting points that became apparent only after the photographic installations.

"I am sure that people will continue to discover connections between the paintings and Karl's photography," Schmidt says. "To have this group of photographs in the midst of the very rich galleries - the idea is that we discover more and more." A portrait of Cara Delevingne, in a campaign for Chanel, is juxtaposed with a historic painting of Mary MagdalenePicture credit: @SuzyMenkesVogue

The public seemed fascinated not by the "compare and contrast" of the vivid blue Chanel dress on Cara Delevingne and a Renaissance vision of La Maddalena in a similar colour, but rather by a framed triptych of Karl. Schmidt says that the happenstance of a masterpiece being taken away for restoration had left a convenient gap that Lagerfeld's photographic portrait could fill. When the polymath fashion designer is on his own with paper, pen, ink and camera, the results can be exceptional. A photographic frieze of "The Voyage of Ulysses" (Le Voyage d'Ulysse) from 2013 references both classical statuary and Neoclassical painting, and defines Lagerfeld's exceptional knowledge of history and art. As does another classic story line of Daphnis and Chloe. Given Karl's intelligence and eloquence, I would have liked these displays to have explanations in his own words - something that is so easy to produce in this digital era. Another presentation,  difficult, even uncomfortable, to grasp without the designer's input, is a room devoted to images and a video of Baptiste Giabiconi, Karl's menswear model and a visual alter ego, writhing on the ground apparently in the throes of an epileptic fit. It is called "The Beauty of Violence". Co-curator Gerhard Steidl explained that the images dated from 2010 in the preparation of the Chanel "Paris, Moscow" collection.

"While working in the studio, Lagerfeld got the idea for Baptiste to play an epileptic crisis, so in the very beginning this video was titled 'The Crisis'. Later on, he found a phrase from a philosopher that explained that when you look carefully, you can also find beauty in violence. It really is food for thought in a political and aesthetic way," he says. "In fashion, destroying fabric by the power and violence of your fingers… maybe out of this garbage one can create a new beauty." I itched to have Karl himself at my side, explaining this to me in his own words. But, loquacious as he is, the designer is also enigmatic. And "Visions of Fashion" is a fine title for this exhibition, installed on the initiative of Pitti Immagine, the organisation behind the current menswear shows in Florence.

I left feeling that, with all the vast museum space devoted to him, Karl Lagerfeld has revealed only fragments of his artistic soul.