Pin-ups: should Miley and Kim build on sexual titillation? 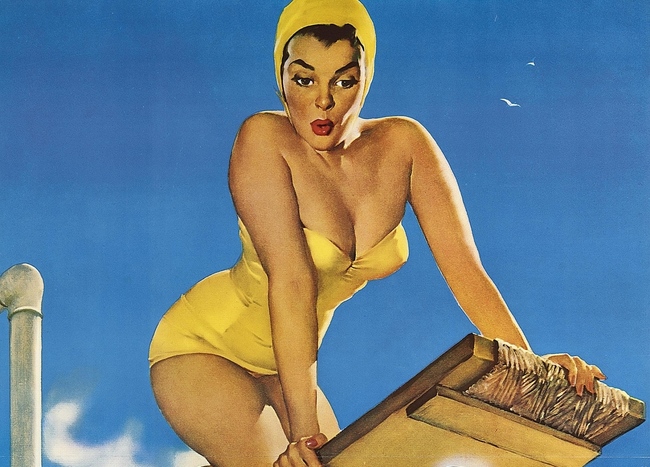 On a wet weekend, the picture made me smile: blonde curls, white teeth and curvy bodies in jaunty swimsuits.

“The Most Beautiful Women in the World”, announced a poster for “Summer in Monte Carlo”. The next image on the screen was Marilyn Monroe in her early days. She was a curvy young thing on the beach, using her parasol as a support for her pose – bottoms up!

I liked the Bally duo with their toes meeting in pastel shoes as they curled up naked; and another Perrier duo who were locked in each other’s arms. I can imagine that in the wartime period of hard times, advertising posters with sex appeal brightened the dim streets. But suddenly, my smile was wiped out by this thought: the cheeky and cheerful images, from an era of playful innocence, looked alarmingly like Miley Cyrus doing her twerking, Beyoncé performing in barely-there outfits of sexual titillation, Kim Kardashian revealing her ever famous posterior and Britney Spears sexing up her once teen-girl appearance.

The last three are mothers – and what a sexist image their stage looks send out to their kids, let alone their fans.

I have no problem with the pin-ups from the past, especially as Christie’s have included posters of men in the sale. Risqué Dior ads from the Seventies show a naked man through a half-open bathroom door. Would I ever buy a pin-up picture? Marilyn in 1949, snapped by Andre de Dienes, might be a cute purchase to enliven my study wall. Although bids can start at £300, Christie’s is putting a starting bid of £1,400 on Marilyn Monroe.

But there is something dispiriting about the idea of Miley and co continuing to distort their bodies as sexual titillation 80 years after Marilyn stepped out on that sandy beach. A century, a millennium and a feminist revolution have happened since then. I have seen sexually charged fashion postcards from Hawaii and Japan. And those prissy Victorians were first out with naughty seaside pictures. But I like to think that pin-ups are in the past. And I am going to dedicate my posts this week to powerful women who send out strong, personal, woman-friendly messages in how they look.

First out: Loulou de la Falaise – and how her role was so much more dynamic than being a mere muse to Yves Saint Laurent.