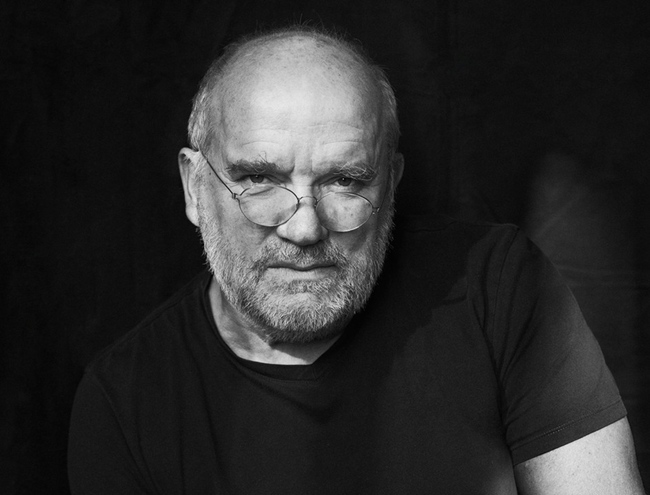 I saw Peter Lindbergh in his Paris studio just as the shock and awe of his images of supermodels 20 years on had hit the internet. There were Nadja Auermann and Tatjana Patitz - both German, like their photographer; Cindy Crawford, still with her golden girl smile; a brooding, Nordic Helena Christensen; Wonderbra's poster girl Eva Herzigová; and Karen Alexander, as lovely with her glistening, dark skin as when Peter had shot her in a plain white shirt back in 1998. It is hardly surprising that the Lindbergh look for this model reunion was unvarnished. That is what he has been doing for his fashion lifetime. But this set of pictures in the September issue of Italian Vogue seems more intense in the refusal to bow to the tools of today's beauty trade: postproduction, a computerised smoothing, hair tidied, wrinkles removed. It is called "enhanced reality".

Refusing to bow to glossy perfection is Peter Lindbergh's trademark - the essence of the images that look into each person's unvarnished soul, however familiar or famous the sitter. "A lot of actors get re-done - but it's just the facade that has changed," Peter explains. "When you see them on the day you shoot them, it's not them. But you don't shoot the architecture of a person - you shoot what comes out of them to you."

A year from now, the Lindbergh philosophy will be presented as A Different History of Fashion at the Kunsthal in Rotterdam, a city where, as a young child, he would holiday with his parents, escaping from the industrial German city of Duisburg that the photographer describes as "so ugly that it makes everything else seem beautiful.

"My view of beauty is probably a little bit tougher because of that," says Peter, 70. "If I came from Venice, I would be different. No?"

The Kunsthal show in September 2016 will present fashion images via 25 designers, fromAzzedine Alaïa and Giorgio Armani to Comme des Garçons and Valentino. Although, in reality, in spite of close personal relationships, the photographer cares little about who designed the outfits and focuses rather on reaching the still centre of the character of the models who wear them.

Behind the upcoming exhibition is Thierry-Maxime Loriot, the Montreal curator whose success with the Jean Paul Gaultier show is now legendary, since it has been shown in ten destinations, culminating in a record-busting 1.8 million-visitor show this year in the Grand Palais in Paris.

Given carte blanche to go through Lindbergh's efficiently stored archives, the curator soon got to the heart of the matter. Every last detail from the client to the location is listed methodically - except for the definition of the outfits themselves. Not a mention! So Loriot had to undertake the hefty research of putting names to the clothes.

"The idea is to tell the story through Peter's images - but it's not a fashion exhibition, it's anti-fashion," says the curator, who has an encyclaepedic knowledge both of what was worn by Nicole Kidman or how John Galliano was persuaded to dress in Comme des Garçons. Lindbergh, looking like a naughty schoolboy hidden in a bearded face, admits that he would deny ever having photographed a Valentino outfit - and then "Thierry showed me and my mouth was open. It's not out of no respect, it's just how I think about the picture."

No wonder that the last Lindberg exhibition, shown across the world, was called Images of Women. And that he started his career dreaming of being a painter, following in the footsteps of Van Gogh by buying a house in Arles. Although the photographer's images are not, of course, in his hero's vibrant colours, but mostly in black and white.

"I was checking the series that he did for Italian Vogue, half the pictures are that instant classic you will probably see in 20 or 30 years," says Loriot. "He really is a fascinating character. I think that it is his humanist approach that we like the best. He doesn't pretend to be something that he is not."

Photography can be a fashion game-changer. I am thinking of Helmut Newton's 1975 Le Smoking image of an Yves Saint Laurent tuxedo in a dark city street. That picture in French Vogue exploded with androgyny and sexuality and defined an era.

I asked Franca Sozzani, editor-in-chief of Italian Vogue, whether the regrouping of the supermodels 20 years later over 20 pages in her current issue was a statement about beauty changing course, giving the artificial images that have dominated the new millennium a reality check.

"Everybody is shaped and re-touched, these people could be anyone - there is no more soul," Franca said. "In production they open eyes, change mouths and create cheeks. But normal people are starting to make fun of fashion. And it is our fault for pushing to the extreme limit. The people I see in the front row at the shows are in another world. It is an idea of beauty that comes from fashion editors, stylists and photographers." Franca, who has used Lindbergh for many memorable fashion shoots in Italian Vogue, defines his approach, with its black and white images or hazy colours.

There is a certain irony in suggesting that some of the world's most beautiful women, with a bone structure that shapes them to perfection, are examples of fashion's "new natural". After all, the Vogue images are the same group who were photographed in biker jackets and miniskirts under a Brooklyn Bridge in 1991, an image known as "The Wild Ones" that will be central to the Kunsthal show.

Lindberg is forthright about actors who get "re-done" - with the result of "changing the facade". Nicole Kidman is one he describes as having a "different face". But his aim is that "you don't shoot the architecture of a person - you shoot what comes out of them to you." In that respect, his recent Angelina Jolie and Brad Pitt portraits are pictures that made him proud.

The stars "who come with their publicists, agents and bring their wardrobes" do not inspire him - especially when he approaches a young actress "and instead of answering they look at their agent."

Has the obsession with Photoshop (even on Instagram, as Thierry says) reached its zenith, making a modern fashion vision ripe for change?

"The way Peter explains it to me, is that he doesn't think it is honest to change someone, because he is trying to capture what others don't see," says the curator.

This comment was made as we discussed another Italian Vogue series of pictures of Kate Moss, without the usual smooth-as-silk make-up on the 41-year-old model's sculpted face. A nagging question haunts Thierry as he digs deep in the Lindbergh archives and prepares for the Kunsthal show.

"Why did he become a fashion photographer if he is not interested in fashion? Well - I have no clue. It is something that he cannot explain. I feel he is more an artist because he paints with light. He gets the most beautiful light, the most beautiful expression. It is also the approach he has with people: very friendly, very human, very normal. You feel comfortable when you're with him, so people just give everything."